Psylocke learned mindcontrol from the best

I suppose its inherent to the nature of telepaths, but most of the X-men's telepathic members have used mind control at one point or another. Back when Stan Lee was writing the team, Xavier used his powers to make Beast's parents forget all about him. Talk about a doozy, but while Claremont was writing, team telepaths made the mind their personal playground. Jean Grey, as Phoenix, was guilty of manipulating Kitty Pryde's parents for instance. But near the end of his run, Claremont had Betsy Braddock, aka Psylocke, commit several mindcontrol transgressions against members of her own team! Lets review some of the highlights... 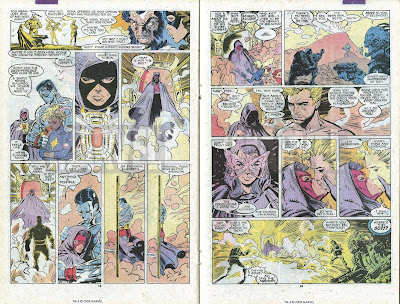 After returning from a mission to the Savage Land, Psylocke sensed that the cyborg criminals known as the Reavers had invaded their Australian homebase. Knowing they were severely outmatched, Psylocke decided to give the team an easy way out: the Siege Perilous. This was a gift the X-men had received a while ago from the otherdimensional ruler Roma. The gem shaped device turned into a portal to the afterlife. Whoever entered through it, was granted a new leash on life, providing a form of instant reincarnation. Prefering this over certain death, Betsy used her mental control to convince her fellow X-men to enter the Siege as the Reavers approached to finish them off. Certainly a powerful moment, but also remarkable as she gives the other X-men no say in the matter. They have to die, because Betts says so. Doesn't really seem right, does it?

Still, Betsy also used the Siege and was got reincarnated. Sort of. I'll spare you the convoluted history of early 90s Psylocke, but basically: she didn't reincarnate into a new form at all. An amnesiac Betsy appeared on an island near Japan. There, she was recovered by Matsu'o Tsurayaba, a businessman who had close dealings with the crime syndicate known as The Hand.

One of their best operatives was the female assassin Kwannon. This minor telepathic hitman got severly injured on assignment, which gave Matsu'o a brilliant idea: lets combine the two women! He got his wish, thanks to the outerdimensional villain Spiral and her Body Shoppe. Spiral placed Betsy's mind inside Kwannon's body, much to Matsu'o's delight.

Also, because this storyline ran during Marvel's Acts of Vengeance crossover, in which heroes fought villains they were unfamiliar with... for that reason alone, the Mandarin showed up in X-men. One of the Mandarin's ten rings of power lets him control minds and... well, I suppose you can see where this is going, right? 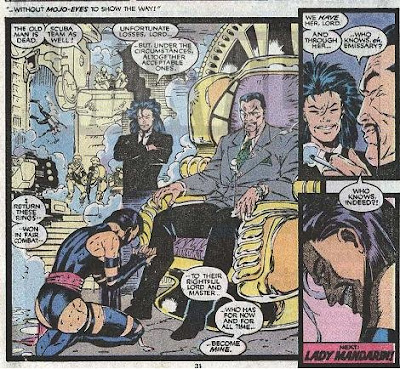 "Next: Lady Mandarin!" Ow, next issue blurbs... sometimes you ARE downright profetic. Yes, I suppose because of the Acts of Vengeance, Claremont had Psylocke 'retrieve' the Mandarin's rings, binding her ever closer to his will. In a startling dream-like sequence, Psylock was forced to kill her fellow X-men and her brother Brian Braddock. They all had one of the Mandarin's rings. Once she completed the set, she was under his complete control, allowing for the transformation into Lady Mandarin. But in her new form, this Psylocke really was into mindcontrol. Lets see what she does when she encounters her former teammate Wolverine and his sidekick Jubilee...

"I am Lady Mandarin"... *SIGH*... I suppose I could fill another blog with THIS particular writing tick of Claremont's. At one point or another most of his characters feel the need to enter the scene shouting their own names. I get why he started doing this, its a great way to introduce new readers to the often confusing array of characters running around any given X-men comic, but still... its hardly realistic. Yet, 'Lady Mandarin' had 'nailed the kid', but her real target was Wolverine. The Hand wanted to forcibly recruit him as their new assassin. Mind you, this was in 1990, a good 15 years before Mark Millar introduced the same concept during his Wolverine run. 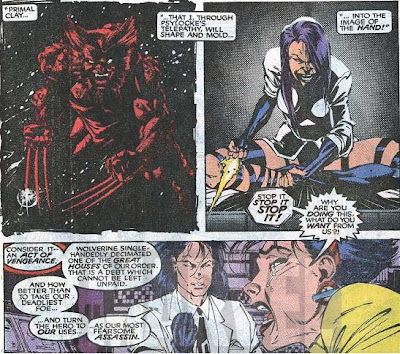 Yup, its mind control at its finest... using her telepathic powers, Psylocke tried to brainwash Wolverine, in an attempt to get his primal, violent urgings to work for the benefit of The Hand. It seemed to work for an instant or two, but Logan broke free. So, if at first you don't succeed... try, and try again... In her new body, Psylocke fought Wolverine and used her psychic knife, the manifestation of her mental powers, to get the job done. 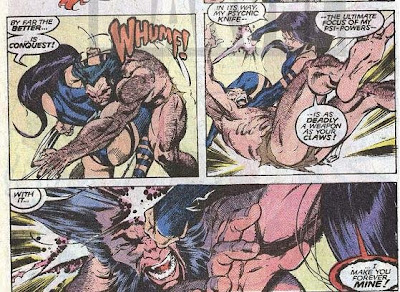 Awww, Betsy Braddock... Once, your telepathy floated like a butterfly, now your knife stings like a bee-yotch!

Posted by Clarmindcontrol at 8:36 PM

None of the X-Men who went through the Siege Perilous woke up in "new forms". They all woke up amnesiac somewhere else in the world that would decide their fate and give them the fate they deserved. Colossus woke up in NY and became a painter and private citizen. Dazzler washed up in Malibu and became a celebrity again I think (not sure, been awhile). Havok woke up in Genosha and worked for them. Rogue woke up in Australia split from the Ms Marvel personality which had been given a body of its own, but with only enough lifeforce between them to sustain one of them - meaning one had to kill the other. And Psylocke, who in her tenure with the X-Men had proven quietly lethal and not quite trustworthy, washed up in Hong Kong to be re-made by Spiral and the Hand into an assassin.

It was actually brilliant, crazy, very brave storytelling, all the more so because it was permanent, or at least intended to be. It made permanent marks. Dazzler never came back under Claremont. Psylocke never was 'herself' again. Colossus remained that way for several years thereafter, being brought back only at the very end of Claremont's run. Rogue's struggles with the Danvers personality were ended. Etc etc.

Part of the misconception that people came back physically changed from the Siege Perilous may involve Storm becoming a kid, but Storm never went thru the SP. She was de-aged by Nanny - which by the way is where you should really be looking. Claremont's comics feature a lot of mind control but what they really feature are a lot of fetish subjects. De-aging, physical transformation (people changing races, Polaris becoming an Amazon, etc), AND mind control. Mind control is just another fetish element, and if it shows up way more often it's only because it's a much handier plot device than the others.

I also take issue with the assertion that the whole Psylocke story only happened (or happened the way it did) because of Acts of Vengeance. The Mandarin's involvement and the name Lady Mandarin may indeed have been due to that, but you can easily imagine a version of this story w/o him and w/o the Lady Mandarin name, that is nearly exactly the same. Matsuo Tsurayaba and the Hand could have fulfilled the same functions entirely by themselves. Psylocke's story was not determined by a chance crossover event.

Thanks for your comments, anonymous :-) Personally, I still consider Claremont's approach to the X-men entering the Siege Perilous and coming out basically unchanged to be a bit of a cheat.

Especially if you look at the way Claremont had Roma introduce the workings of the SP (http://www.uncannyxmen.net/images/article/uxm229-1.jpg) She clearly states anyone who enters it, gets 'reborn'... Which is a phrase open to interpretation, sure, but all the Reavers that got sent through in UX-229 got a whole 'nother life. If you follow the Claremontian logic, all it takes to undo a trip to the SP is a good telepath ready to erase this fake new personality the 'higher powers' bestowed upon you.