Just imagine for a second you were a powerful but disembodied psychic entity... Trapped on the astral plane, looking at a world you can no longer directly influence. I'm sure after a while you'd get pretty pissed off, right? That's basically the entire reason for the Shadow King acting the way he does (apart from being pure evil for, well, evil's sake I suppose).
When police detective Jacob Reisz died of an appearant heart attack, the Shadow King took control of his body and started recruiting people for his cause. No, he didn't really need a physical presence in this world, he could easily influence folks from afar.

But hey... your heroes need someone to punch, so the Shadow King recruited Lian, a woman (dressed in black leather, in true Claremontian style) who acted like his second in command. He also gathered a bunch of footsoldiers known as Hounds, who acted like wild animals and were dressed in... ow, you guessed it. 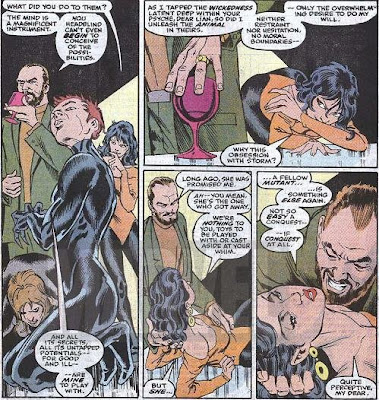 So, what was the Shadow King all about this time? Ow, the man had a big plan! He wanted to feast on all the hatred and bad feelings of humanity. You see, negative emotion is like a drug to the Shadow King. He feeds on it, so he does everything he can to fan the flames of intolerance and hatred.
It was never explained on panel, but I guess that's why people around Polaris suddenly started acting crazy. She had lost her powers in the Savage Land, but all of a sudden Lorna was superstrong and had some kind of uncontrollable negative emotional pull on people. Which was bad news in itself, but then the Shadow King showed up on Muir Island where Lorna had been residing. He took control of Xavier's son Legion and started pulling the strings behind the scenes. Take a look...

That's Legion, shown here in his Jack Wayne persona, pleading Carol Danvers for forgiveness. Carol had come to Muir Island after she got seperated from Rogue (its a long story involving the Siege Perilous, the Reavers, Magneto and more). Once she got to the island, Legion and the King tried to take her over. Poor Carol didn't really stand a chance. Not that her former mind-partner Rogue fared any better when she came up against the King... 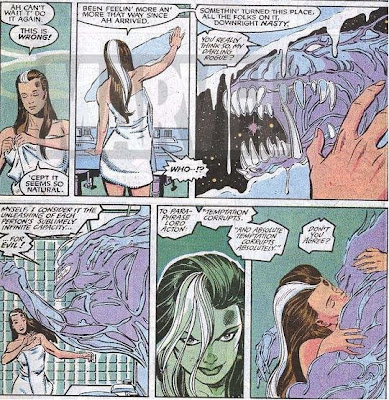 ... Hmmm, well, if you can't beat them, join them I suppose. But where Rogue joined with the King semi-willingly, there were others who offered more of a struggle. You see, Shadow King was also busy controlling the American government. In such an undertaking, there's one government official you just can't ignore: the ever ready willing and not very able Valerie Cooper. Val fell under the King's influence too, but at least she felt a little bad about it... 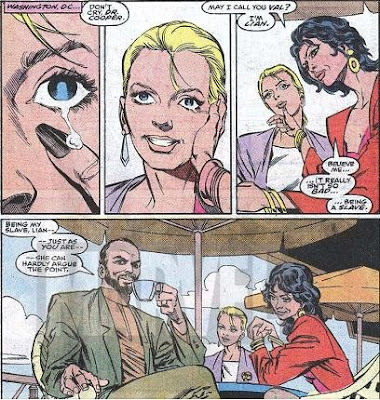 Owww snap and all that... But the King still wasn't without his pet peeves. He carried a particular grudge against Storm, who he considered a prize possession that had gotten away. He was hell bent on getting her under his control. Storm, by that time, had been reduced to a preteen by Nanny and was running around New Orleans with the (in those days) mysterious and exciting mutant thief Gambit. Shadow King tried his darndest to get to Storm. 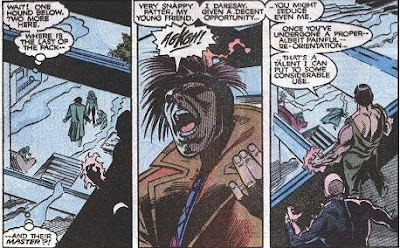 The road to Storm went through the ragin' Cajun but the King and his hounds were very eager to add him to the list of mental accomplices as well. The big win for Shadow King was Storm herself however and, like he tried so many years before, the Shadow King once again attempted to control the weatherwitch. 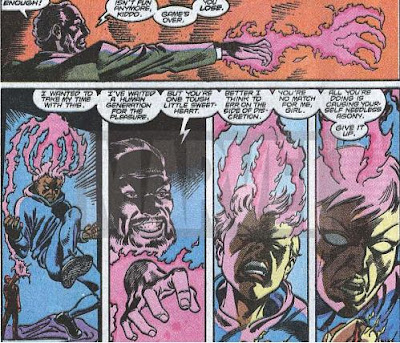 Of course, Storm broke free and got away with Gambit (hey, this is called the X-men not Shadow King... the bad guys still always lose). Yet, the King and his flunkies remained a thorn in the X-men's side and they even expanded their targets to include the other X-teams like X-Factor. Here, original X-man Jean Grey gets blindsided on the Astral Plane by the Shadow King and Lian, his Queen. 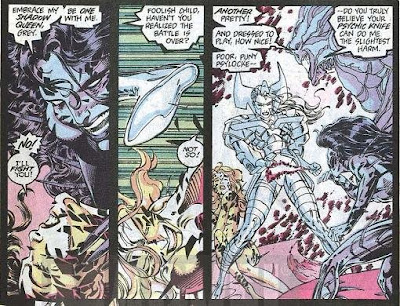 Jean was saved by (early 90s bad ass) Psylocke, but by then it was obvious: the Shadow King was a problem that had to be dealt with. So, who you gonna call? Yup... the man who originally took care of the King: Charles Xavier. In part 3: we find out getting Charles back also involves some mind control and the professor is revealed to be a fan of 2 can play that (mind control) game!
Posted by Clarmindcontrol at 8:32 PM