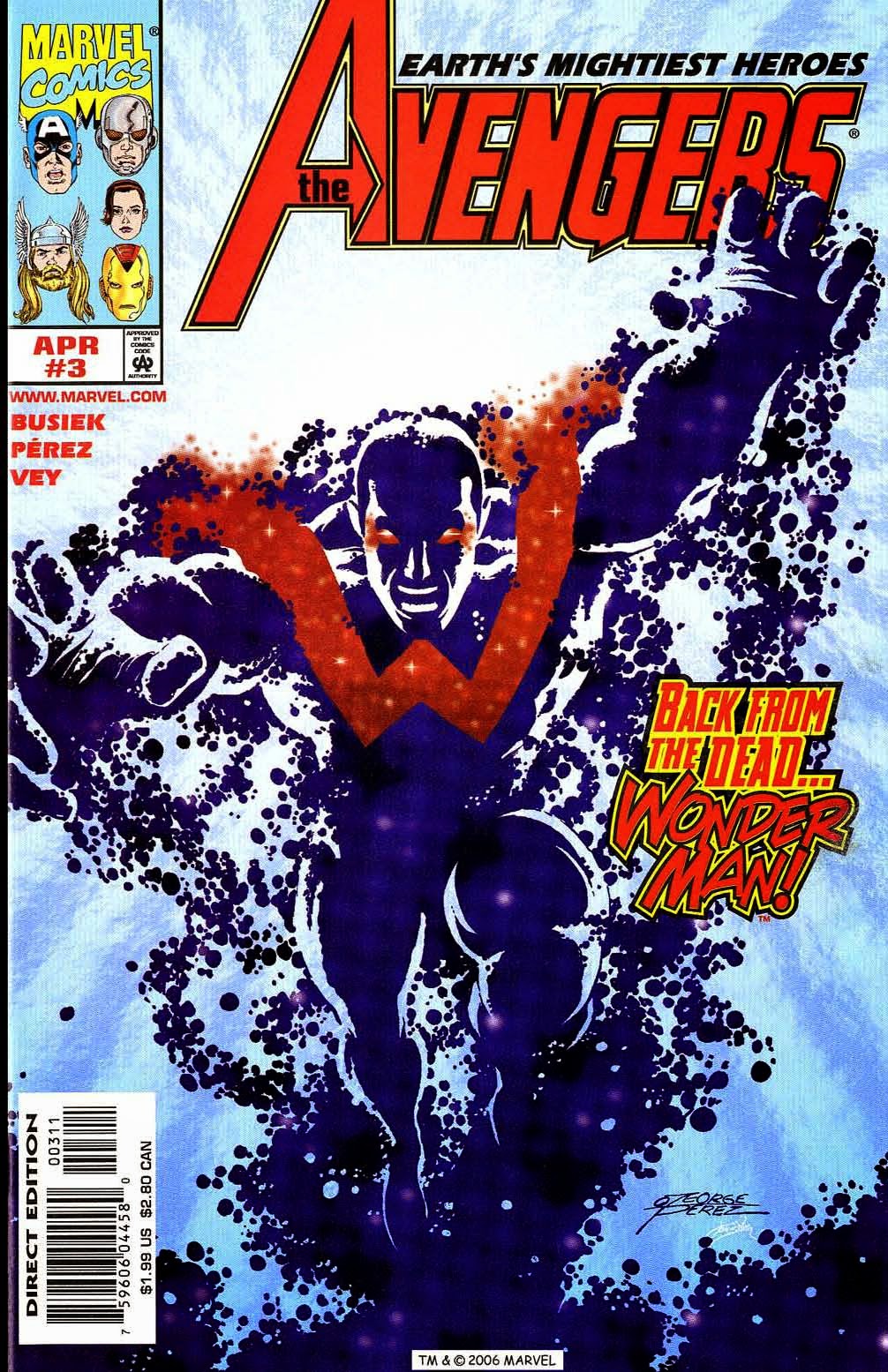 The Avengers had only recently reformed following their return to the Marvel Universe proper after 1996's Onslaught storyline. Right off the bat, the entire team was threatened by mystical menaces summoned by Morgana LeFay in a complicated scheme to get her hands on the Scarlet Witch. Through Wanda's reality altering magics, plus that of the Asgardian Twilight Sword, Morgana could alter all that is at will. At the end of issue 1, she rewrote history and turned the entire planet back to medieval times, with the Avengers as her personal guard, the Queen's Vengeance.

By #2, some of the Avengers saw through this fake reality and, led by Hawkeye and Captain America, started a small rebellion. The bulk of the Avengers remained under Morgana's spell while the others fled to the nearby forest to prepare for their next move. Oh and much to Morgana's chagrin, Wanda had vanished too. And that's where we pick up in #3.

Either it's a shameless repetition, or the man's misquoted and he was just saying "ay ay". Considering Moondragon, or Selene as she's called here, was sifting through his mind with the equivalent of a rusty poker I'd bet on the latter.

For someone so concerned with the fact she has lost control over her power, Morgana sure doesn't mind unnecessarily repeating herself. And her nephew Mordred joins in on the fun... Guess repetition is a family trait.

If the seemingly all-knowing narrator feels the need to do a William Shatner style repetition, you know something dramatic is about to go down. Like the appearance of Wonder Man. 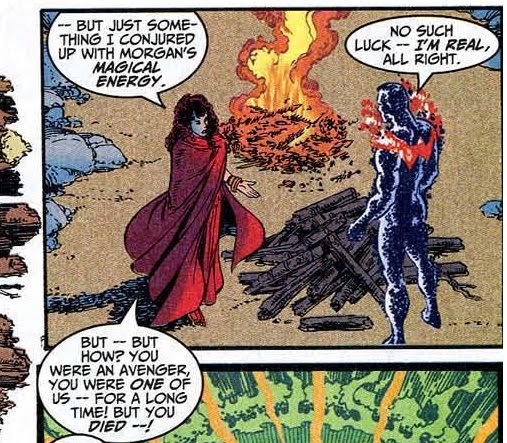 You'll note Wanda used the word "but" no less than four times in the brief space of two word balloons... And who can blame her, ionic energy Wonder Man does have a but-icularly nice behind. 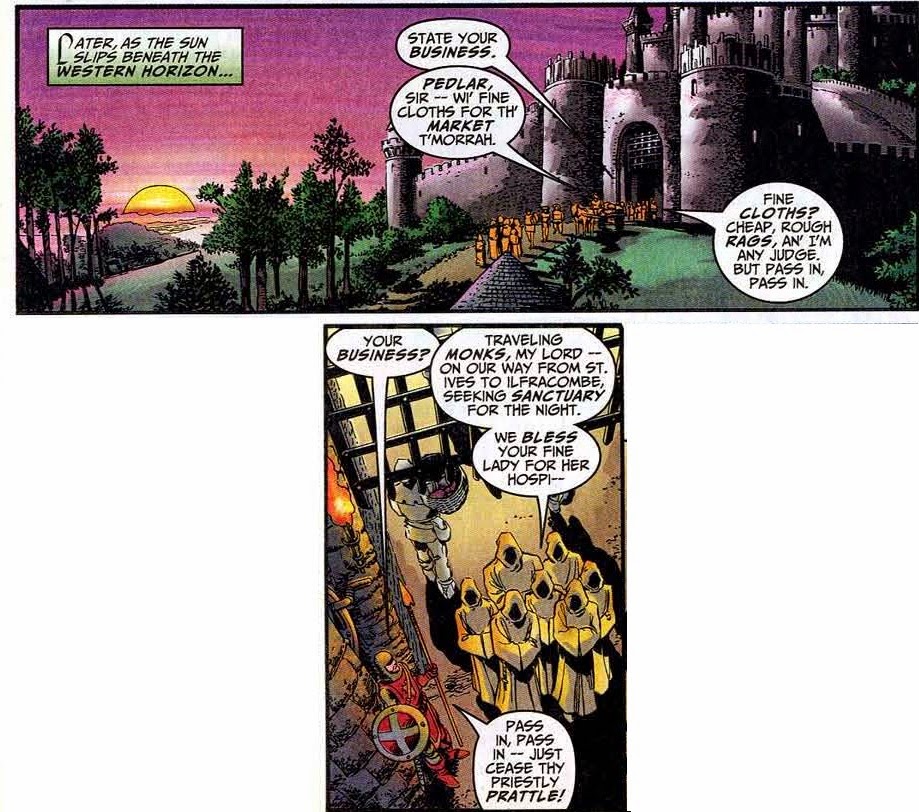 While artist George Perez does the heavy lifting giving life to Morgana's medieval world, complete with Arthurian castle and ditto landscape, Busiek shamelessly repeats his repetition. And yet the editor let it pass through, pass through...

The Avengers sneak into the castle, dressed as monks, only to be discovered by the Queen's Vengeance, which led to a repetition heavy battle. 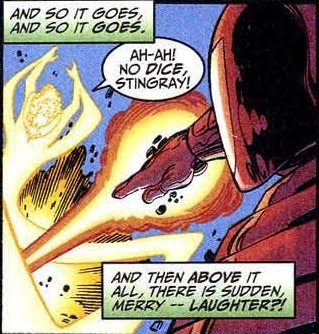 Well, now that particular Billy Joel classic is stuck inside my head, and you're the only one who knows.

In the end, Morgana gets involved in the fight and taunts the Avengers with the Twilight Sword, which leads to the arrival of Wanda who uses Wonder Man as a weapon of sorts. 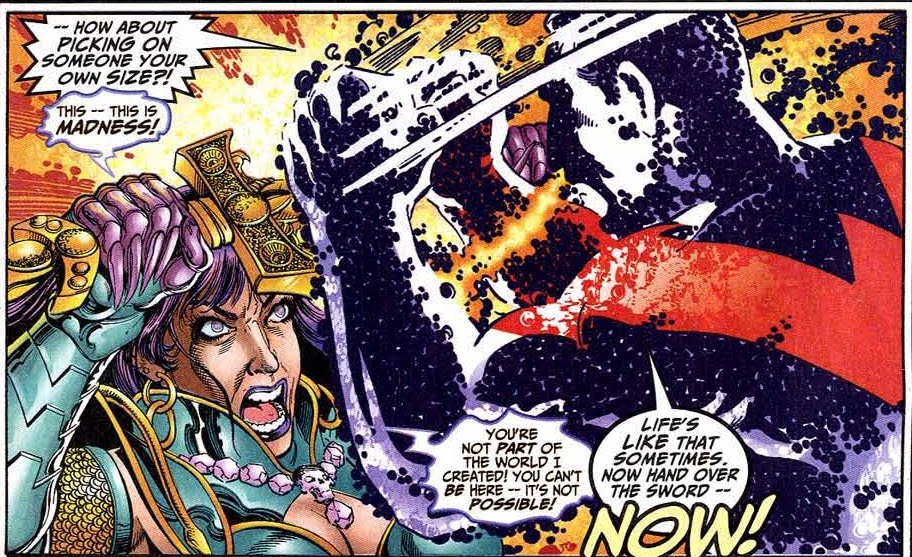 I'll say, Morgana... but then again, so it goes, so it goes. Darn that earworm!

Repeating yourself twice in two sentences is also a tad more I'm used to, Justice... 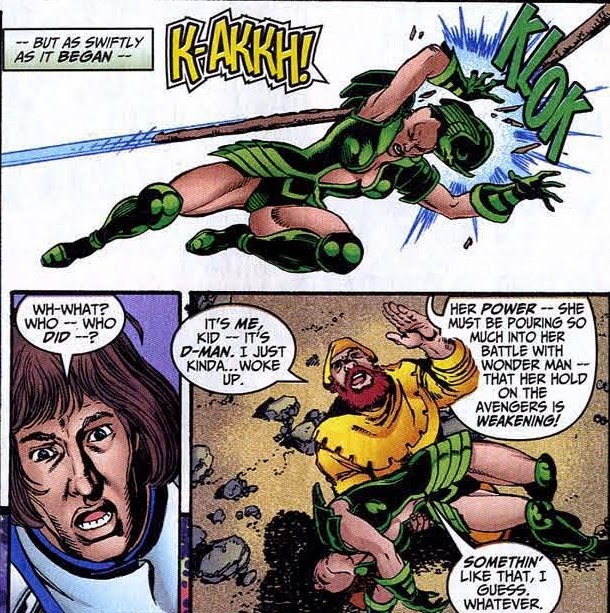 We get it, Justice... You want to be an Avenger so bad, you're already starting to talk like one.

Meanwhile, during a battle that actually matters...

"I don't think you can handle this!" 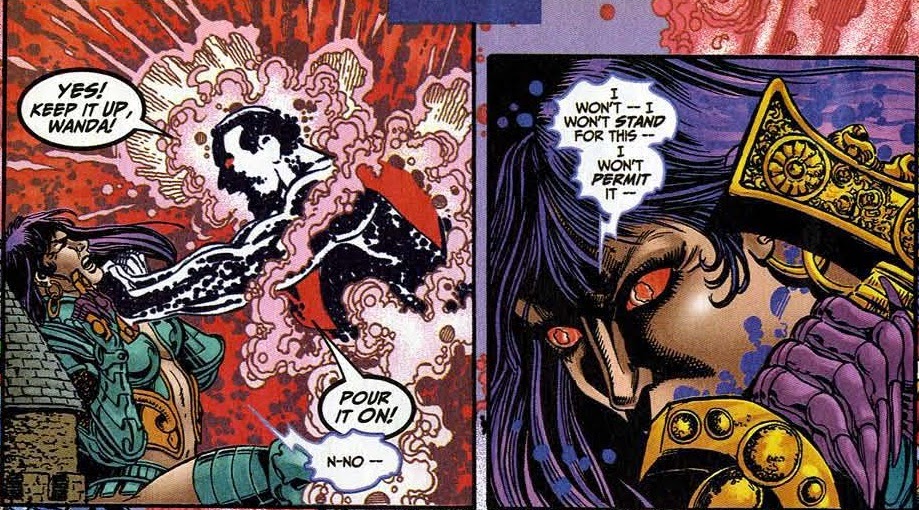 Classic Golden Girls comebacks aside. Morgana is thoroughly pissed off and goes in for a final offensive which would have easily overpowered Wanda if not for the fact the Avengers all added their power to hers to help empower Simon. You can imagine Morgana didn't stand for that either, which actually helped the fact she repeated her words make more sense. 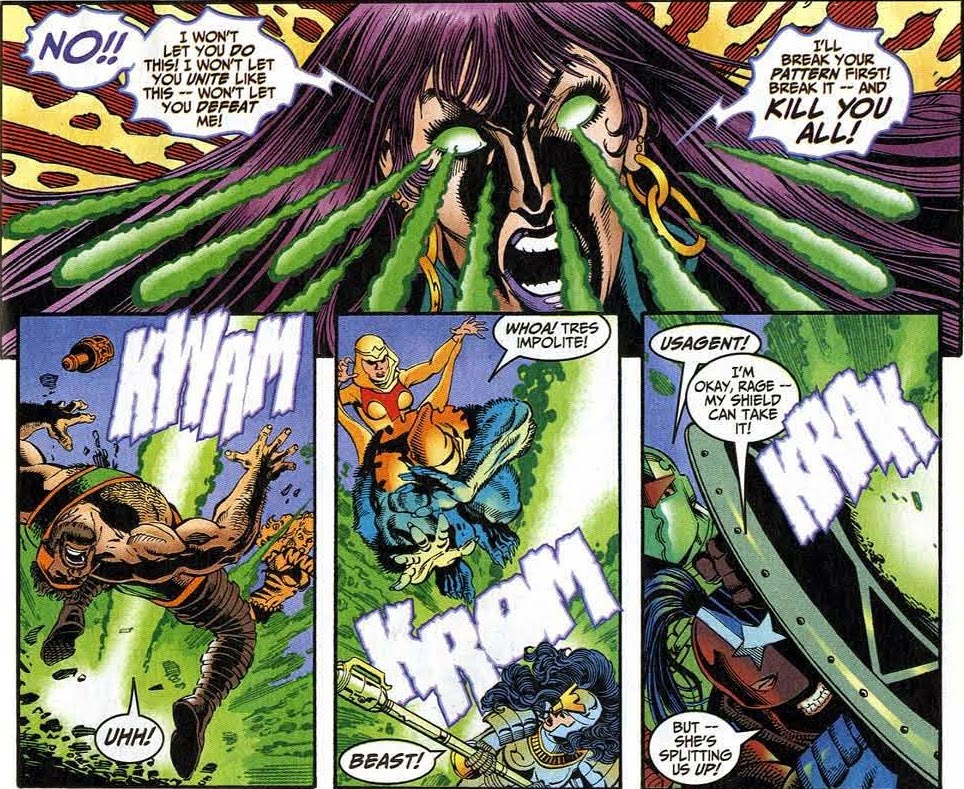 Oh fine, so she didn't exactly repeat her words, guess someone didn't let her. 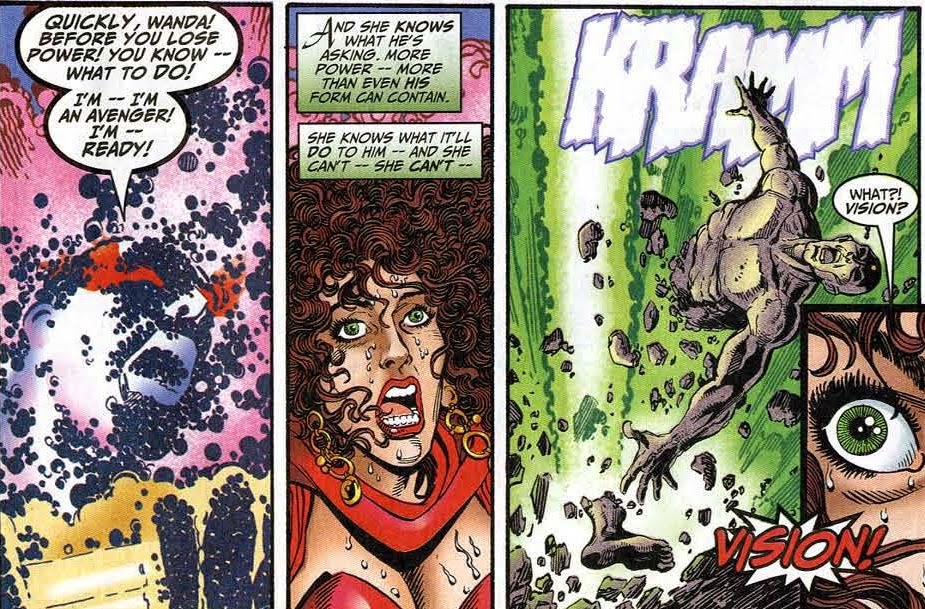 Don't mind me folks, or the triple repetition pattern, on to the climax... 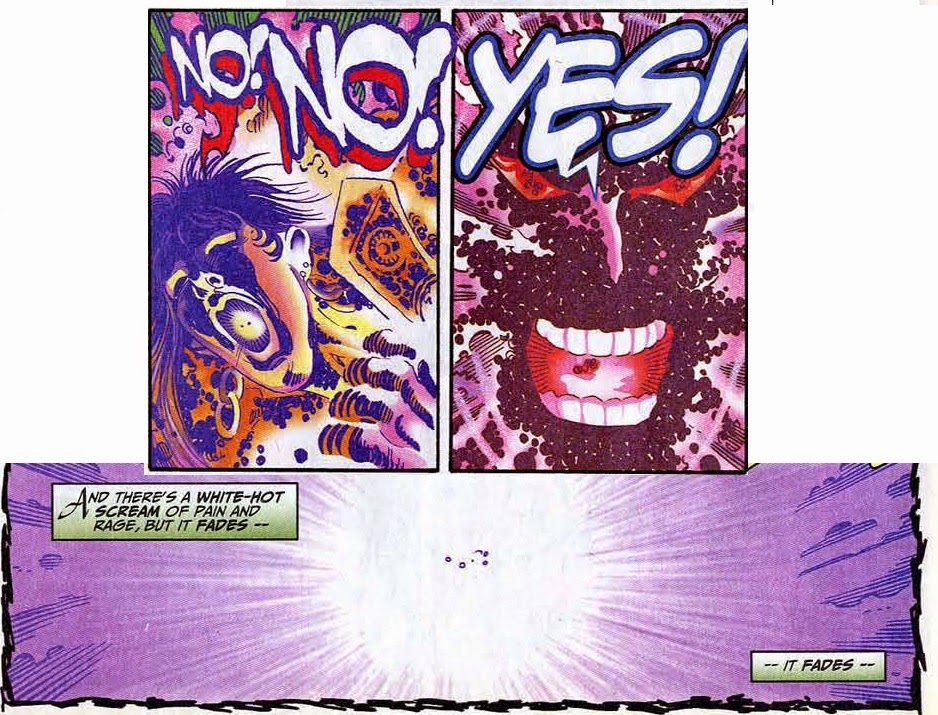 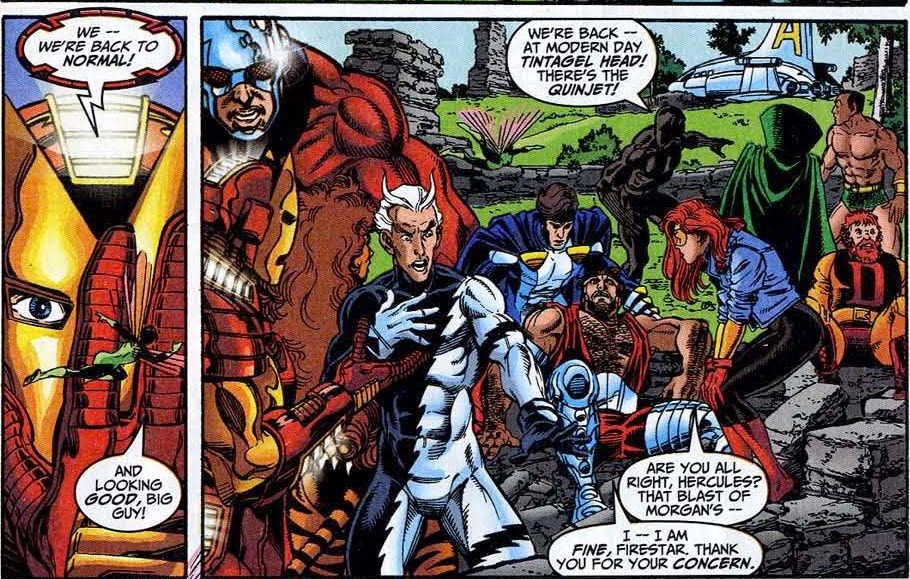 Yup, Morgana's defeat immediately caused the collapse of the alternate reality she'd created, returning the Avengers to their real guises and identities. They seemed none the worse for wear... for the most part. Wanda's never been able to pick between Vision and Wonder Man and why not... they're so alike. For one thing, they enjoy repeating the bleeding obvious. Heck, even when one of them is obviously bleeding to death... 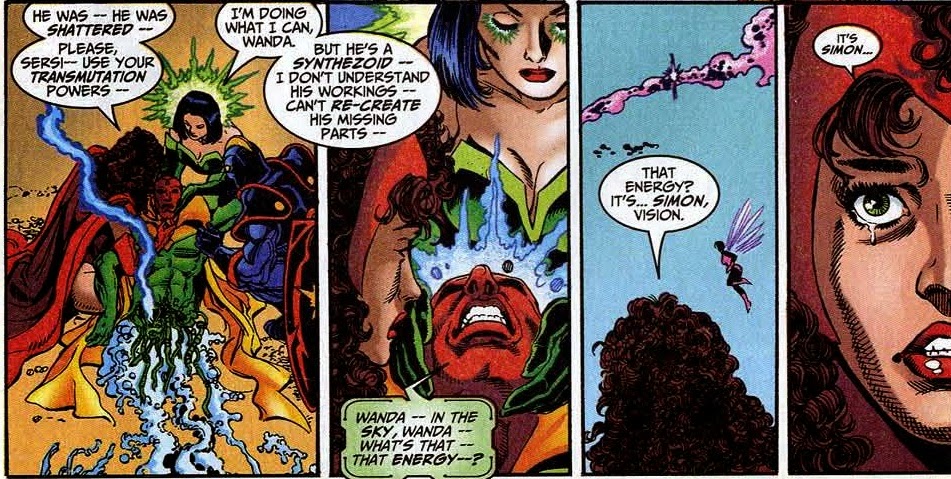 Considering the Vision's personality matrix was based on Simon Williams' brain patterns, that last bit of repetition feels a little like poetry. But with the threat of Morgana dealt with and everyone more or less back to normal, the issue neared its end...

So, why not end with a panel that has no word repetition whatsoever, though it does repeat another classic Marvel sequence... 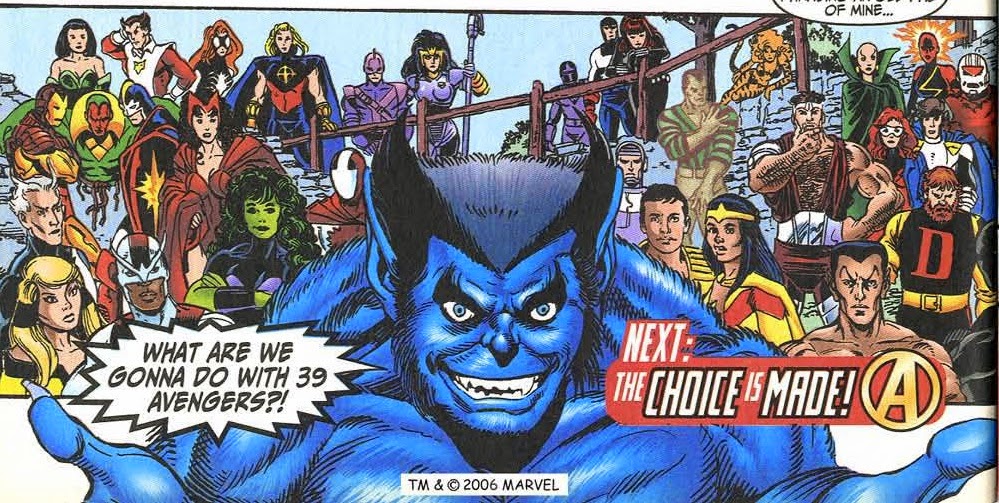 Who knows, Beast... Angel didn't know either, back in the day... 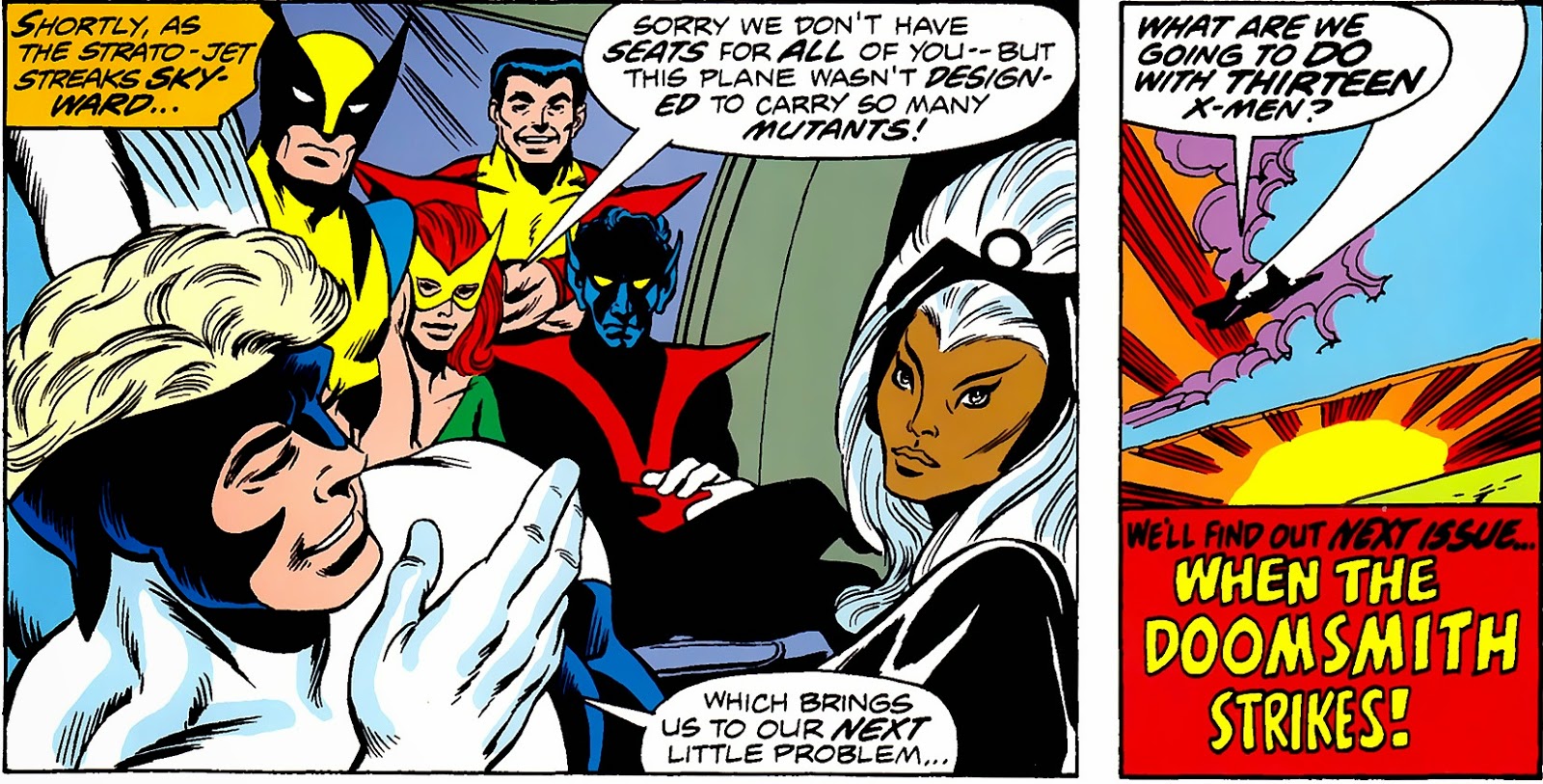 Come to think of it, Hank... You weren't even there for the Krakoa mission in Giant-Size X-Men I#1. How could you know what Warren said?

Doesn't Beast say the same sort of thing at the very end of the Muir Island Saga? "What are we going to do with 14 X-Men?" All while he's thinking about how he'll commit his next genocide.

Wow, I actually have that issue (now I feel like re-reading it!) I'm actually a big fan of Kurt Busiek. In fact, I've written about Superman: Secret Identity in my blog (wich I encourage you to visit):

I hope you enjoy my review, and please feel free to leave me a comment over there or add yourself as a follower (or both), and I promise I'll reciprocate.


Thanks for posting Really Such Things. I should recommend your site to my friends.
hp printer customer care number