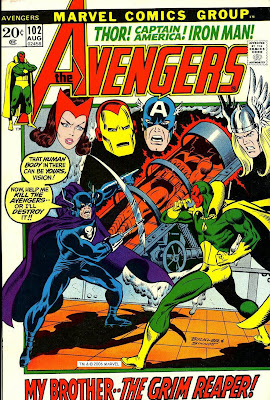 Remember the days when covers were connected to the story and even contained dialogue? Not to mention when the Avengers were giant, floating heads looking shocked and judgemental? The 70s were a wild and crazy time for all of us.

Fair's fair: Chris Claremont doesn't actually write this issue, regular Avengers scribe Roy Thomas is responsible for working out what the Grim Reaper wants the Vision to do. But he does give credit to Claremont for giving him the idea to tell this particular tale... And of course, it involves mind control.

It all starts with Vision being summoned by the Grim Reaper, because apparently back in the 70s, Avengers paid social calls to their villains in their secret headquarters without telling the others. The Vision wasn't feeling very sociable, though. He had slowly developed feelings for his teammate the Scarlet Witch but felt his android nature would make it impossible for him to court her. Somehow, the Reaper had clued in on this and hatched a plan.

"Join me, and I can transfer your present brain into that body... and make it live again!"

This story continued the Grim Reaper's longtime obsession with his brother and the Avengers. In fact, Eric Williams only became the Reaper so he could avenge his brother's apparent demise at the hands of the team. Now, with the introduction of the Vision, whose android mind was based on a blueprint of Wonder Man's brainwaves, the Reaper's obsession took on a whole new level.

"Well, don't mull too long! Even my patience is not without limits."

And here I was thinking homicidal maniacs with a scythe for a right hand weren't known for their patience. Anyways, the notion of gaining a body that's not made of red plastic in order to court Wanda is a tempting one. Still, Vision's a hero...

"What prevents me from capturing you here and now... then seizing my former human shell?"

Isn't that interesting? The Vision wants to do the right thing... and if the right thing is putting a villain behind bars, only to do exactly what he wanted and desecrate the corpse of his brother anyway... Hey, then so be it. But the Reaper wasn't born yesterday... 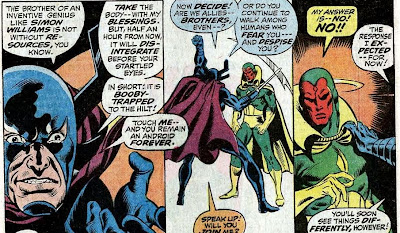 "In short: it is booby-trapped to the hilt!
Touch me... And you remain an android forever."

If the Punisher is any indication, men who wear all black and a skull for a costume aren't known for their compassion. But at least Frank Castle is a competent tactician. The Reaper's one bargaining chip was his brother's body, which he threatens to destroy if Vision tries to stop him. It's like threatening to kill a hostage when that person is actually the one thing that prevents the police from shooting you.

All that seemed lost on Vision, who simply wanted to leave. The Reaper didn't stop him, but he would be a lousy host if he didn't give his house guest a parting gift.

That's right, the Grim Reaper gave Vision a crossbones medallion that doubled as a communications device... before revealing his secret headquarters secretly belonged to someone else. Someone who probably won't notice the cryogenic unit with the semi-dead superhero just sitting there.

Roy Thomas soon left the book and incoming writer Steve Englehart eventually resolved this story in Avengers # 106 - 108. In this threeparter, the Grim Reaper teamed up with the Space Phantom to defeat the Avengers. Oh, and the whole 'have my kinda-dead brother's body' proposal turned out to be a convoluted lie, a ploy by the Reaper to plant the idea of obtaining a real body in Vision's head. Because the actual body the villain wanted his 'brother' to inhabit was Captain America's.

Long story short, Vision kindly turned down the invitation to take over his teammate's brain. The Avengers took care of the Reaper, the Space Phantom and their flunkies and in the end, the experience gave Vision the confidence to open up to the Scarlet Witch and show his feelings. And with that, the first seeds towards their inevitable wedding were sown... 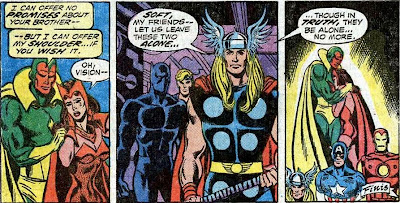 Not bad for a single Claremont idea!
Posted by Clarmindcontrol at 4:34 PM