Spotlight On That Soul Sucking Mind Controller... And Satana too! 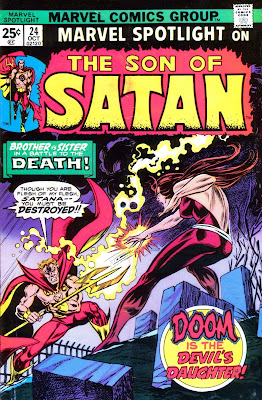 The year is 1975, right when Chris Claremont was gearing up to start his 16 year run on (Uncanny) X-men. But before all that, there were stories like the one he told in Marvel Spotlight, featuring Daimon 'Son of Satan' Hellstrom and his sister, the succubus Satana.

He's the demonologist who exorcises Satan's lot, she is the wanton devilchild who consumes tsouls of the innocent... And Claremont makes three... Let's dig in! 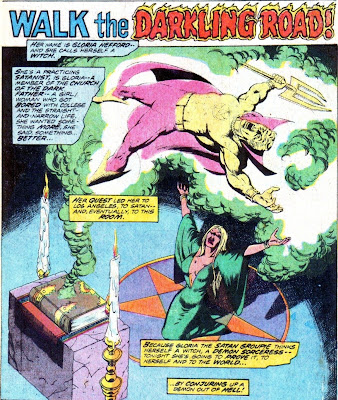 Meet Gloria Hefford, a minor satanist with delusions of mystical grandeur. She wants to make a name for herself as a witch, by conjuring up a real demon from hell. Unfortunately, she may have bitten off a tad more than she could ever hope to proverbially chew. 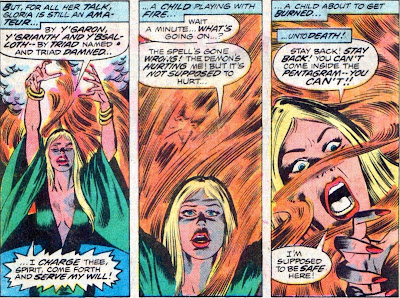 "The spell's gone wrong! The demon's hurting me! But it's not supposed to hurt!"

Ow, don't worry Gloria, the pain won't last long. You see, even inside your pretty pentagram, with its protective little wards, you are not safe from a proper hell demon's power. 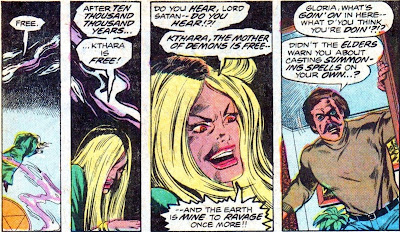 Yup, poor ol' Gloria got herself mind controlled and bodyjacked by the very demon she tried to control. Now Kthara is running the show, using Gloria as her vessel. And what does a hell demon do best? Gather souls for the inferno below, of course... 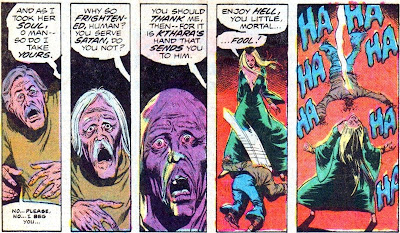 Yeah, looks like Gloria's became a bit of a bother. That's why, two weeks later, Daimon Hellstrom, acclaimed demonologist and close Hefford family friend, boarded a plane bound for LA. He had received a letter from Gloria's father Lewis, who was worried about his daughter's well being. During the flight from St. Louis to Los Angeles, Daimon fell asleep and had a terrifying vision featuring his sister Satana.

So what is it a succubus does, except for the obvious observation the job sounds a lot like 'suck' and 'you'? Well, she pleases men right before reaping their very souls. In his dream, Daimon is witness to Satana claiming her latest victim... 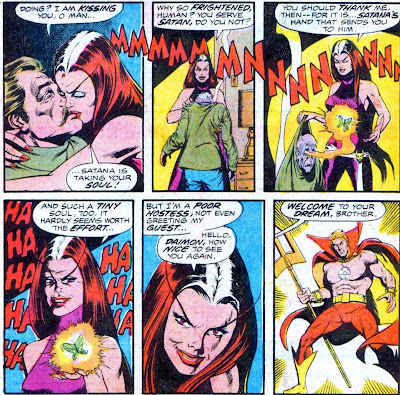 But Daimon's nightmare didn't end there... Satana focussed her attentions on him, changing Daimon into his Son of Satan attire before doing something which was pretty much unheard of close to 40 years ago, let alone in a Comics Code Authority approved book... 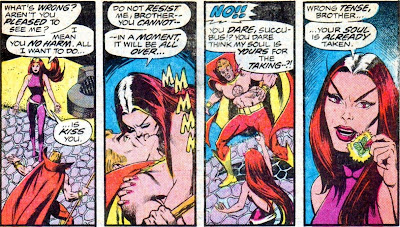 Not even Ultimates vol. 3 was quite this graphic about the physical relationship between Quicksilver and his sister Wanda... And that was written by Jeph Loeb! Still, Daimon was more concerned with the aftermath of the kiss: the loss of his soul. Satana claimed she'd already taken it, as she mockingly clasped the ethereal butterfly meant to represent a person's lifeforce. Luckily for Hellstrom, this was just a dream.

Arriving in Los Angeles, Daimon was a little surprised to see who had come to pick him up: Gloria Hefford. But isn't she supposed to be...? Nah, no worries, she had a perfectly good explanation for her father's frantic writings... It's all Satana's fault! 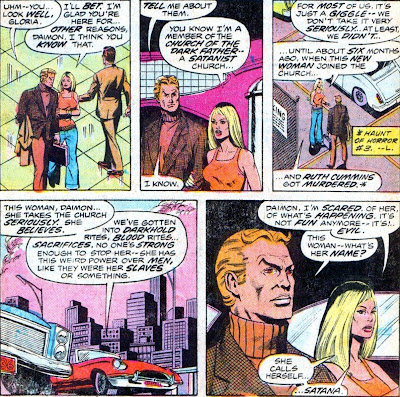 "She has this weird power over men, like they were her slaves or something"

This is enough to convince Daimon his sister is the one behind Gloria's corruption, not to mention the murder spree that has plagued the city over the last fortnight. Tracking her to a local cemetary, the Son of Satan went forth to confront the succubus. Who denied all of Gloria's claims... 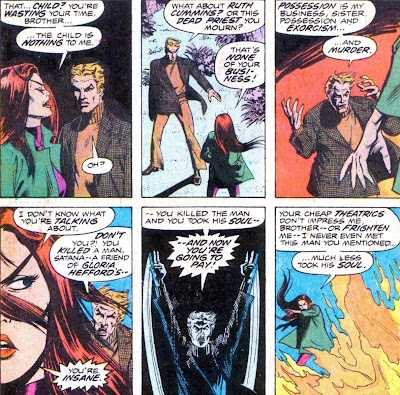 "You killed the man and you took his soul... And now you're going to pay!"

Usually, the brother and sister inheritors of hell were too evenly matched for one to overwhelm the other. But this night, much to his own amazement, Daimon was smarter, faster and stronger. He managed to overcome Satana's power before doing the unthinkable... 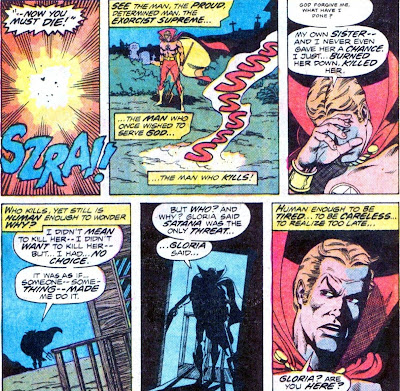 And that someone, or rather: thing, was Gloria Hefford.  As Hellstrom discovered after he was knocked out by her powers and he came to, bound to a sacrificial altar, ready to be slain as Gloria's twelfth victim.

Or, to be fair, it wasn't really Gloria anymore. Kthara was the one responsible for the letter that summoned Daimon and she used her powers to influence his dreams on the plane, adding more lies to the mix when she picked him up from the airport.

But let's have Kthara explain all that ánd the big plan behind this entire ruse herself... 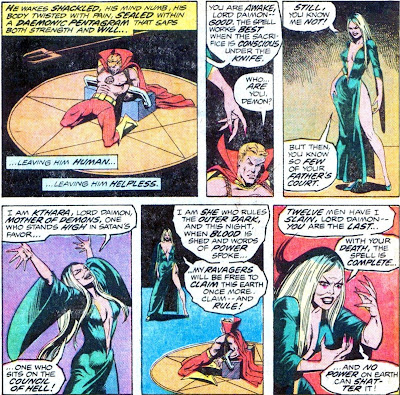 "Twelve men have I slain, Lord Daimon... You are the last... With your death, the spell is complete... and no power on Earth can shatter it!"

Boy, 70s writers sure loved to emphasize their scripts with bold font, didn't they? Anyhoo, before Kthara could K'kill Daimon, the ritual was disrupted by Satanna who had mysteriously survived her brother's supposedly lethal hellfire onslaught. Kthara, proving her title as the mother of all demons, summoned a bunch to keep Satanna and Daimon occupied but the siblings of sin proved too strong and soon made their way to her anyway.

Daimon, in an attempt to earn his keep as an exorcist, tried to banish Kthara outright with a variation on the good ol' "The power of Christ compels you"-bit... But she wasn't having any of that... 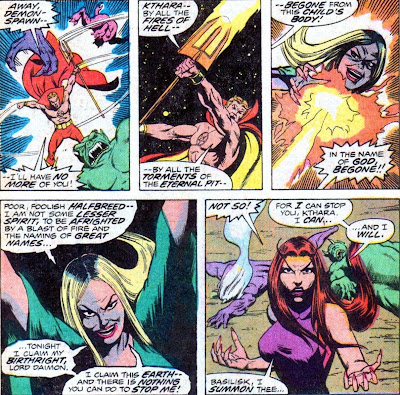 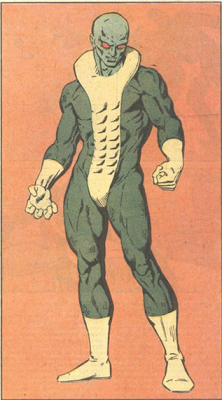 No, not Basil Elks but Basilik...

In fact, Basilisk is the name of a powerful demon that hell lord Mephisto grafted on to Satana's soul right after turning her into a succubus. Basilisk can be summoned to do whatever Satana needs him to do. But the use of the demon's services slowly corrupts her.

Considering it makes for a pretty lightshow, not the worst of trade-offs... 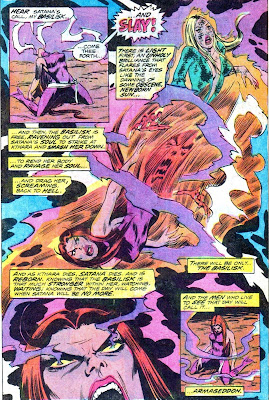 "The Basilisk is free, ravening out from Satana's soul to strike at Kthara and smash her down... to rend her body and ravage her soul... and drag her, screaming, back to hell."

So, the threat of Kthara ends to the apparent anything-but-deus ex machina that is the Basilisk. But as Daimon Hellstrom approaches his sister to congratulate her, she is in no mood. 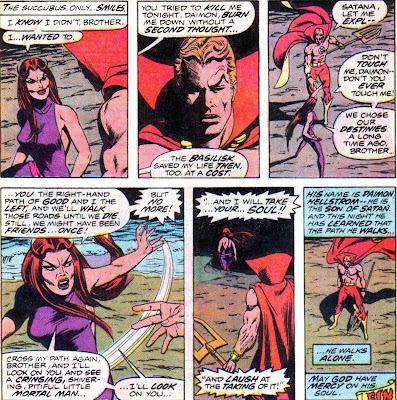 Still more civil than most of my family reunions, though...
Posted by Clarmindcontrol at 12:19 AM