Whether he uses it to help along running plotlines, set up shocking story twists or... in this tale from X-men Forever... spice up a cliffhanger. But before we get to the 'to be continued' moment, let's get started.

In the alternate reality of the X-men Forever series, the mutant population was plagued by a lethal disease called 'Burnout'. In essence, having mutant powers burns up the body, leading to premature deaths.

The older mutants like professor Xavier and Sabretooth were already feeling the effects. Charles los his ability to walk and Sabretooth's healing factor was starting to give out, which left him blind and without a hand. The feral mutant was staying with the X-men at the time (long story) when the mansion was invaded by the Morlocks who took him ánd Moira McTaggert prisoner.

Even in an alternate reality, their leader Masque was as sadistic as ever... 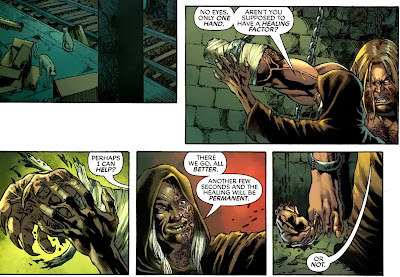 How unlike Masque to... lend a hand... to someone who helped kill many of his fellow Morlocks. After all, Sabretooth was a member of the Marauders during the Mutant Massacre. But as Sabretooth explains, it wasn't him.

Years ago, he had handed Mister Sinister a sample of his DNA and the evil mastermind used this to make as many Sabre-clones as needed. The real one had never actually been a Marauder. Besides, that's not why Masque dragged Sabes and Moira to the sewers. 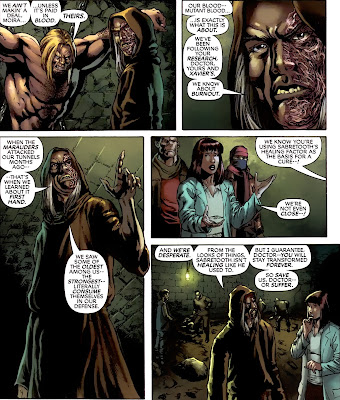 Masque wants Moira to work on a Burnout cure, using Sabretooth's healing factor as a template. Which was exactly what the doctor was already doing... in the X-men's fully equipped, highly advanced laboratories, ya know, the one with the alien Shi'ar medical technologies a few centuries beyond human development...

And now she has to do the same job underground where the most advance piece of technology available is that lone little lightbulb dangling in the back. Smart move.

It was equally stupid to break into the X-men's home through the sub-basement and leave a trail of destruction that led the team right to Masque's doorstep. Shadowcat, doing her best Wolverine impression, ordered Masque to stand down and let everyone go free, but he's a sneaky one... 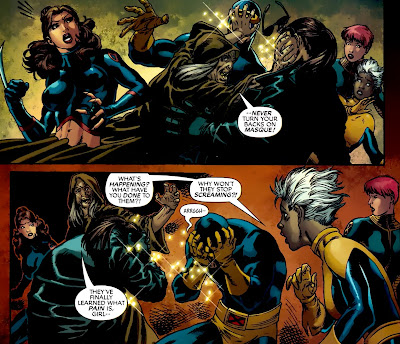 "Why won't they stop screaming?!"

Well, little 'Ro, if you think a single, mumbled 'aarrrgh' from Cyclops is a scream, I wonder what you're doing on the next page... 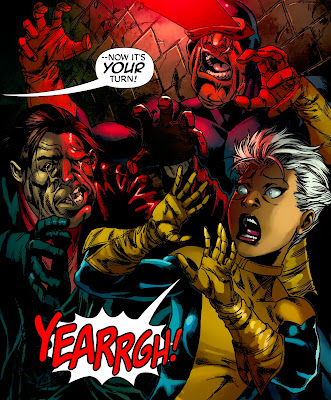 Oh my! Masque's touch apparently mind controlled both Gambit and Cyclops, turning them against the team, as the now monstrous men lunge for the young child. Will they catch her? Will Masque change her too? What a cliffhanger!

X-men Forever vol. 2 # 5 opens with a recap of the events I just recapped... While 'Ro is chased through the sewers by Gambit, Cyclops and some other Morlocks. That kills a few pages and just when they catch up with her... 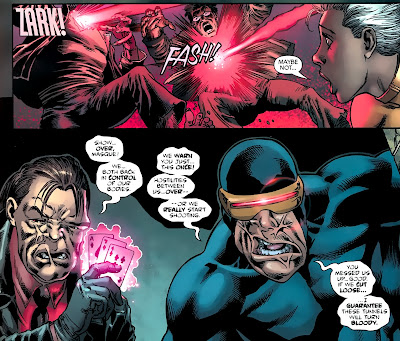 "Show over, Masque! We... both back in control of our bodies."

... Well, that didn't take long. Usually this takes at least half a dozen issues and big speeches about mind, body and soul to get it all sorted out. To quickly dismiss the mind control angle after playing it up in the cliffhanger almost feels like cheating the readership... Then again, it ís a refreshing change of pace.

Either way, this brought Masque's mind (or body, come to think of it) control shenanigans to an end. He next showed up in Genosha, along with one of the many, many Storms that Claremont starred in this particular title.

Posted by Clarmindcontrol at 3:35 PM