Abdicating All Control Of Your Mind Part I: And Then There Came A Day To Give It All Away

In all honesty, this post wasn't supposed to show up for at least a month or two. But since yours truly is undeniably Dutch and queen Beatrix of the Netherlands formally announced her abdication today, we might as well take on the time Chris Claremont wrote about royal succession in the pages of Excalibur. Not too surprising, it involved mind control.

To establish a little background: By the time issues # 12 and 13 rolled around, Excalibur had been a little lost thanks to the dimension hopping creature Widget. For the past several issues, they'd been trying to get home, reluctantly visiting alternate realities in an equally alternate train which hailed from a world where the Nazis won World War II.

The dimensional train's arrival startles a young child, who is taken aboard and cared for by the team. 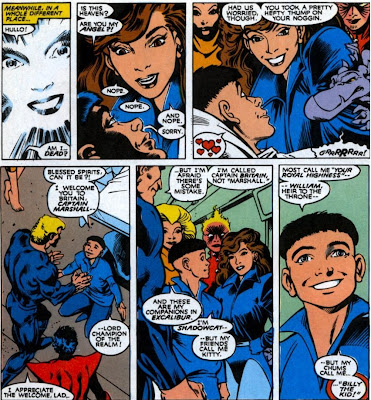 What are the odds... Excalibur almost crushes prince William, the heir to the throne... But William doesn't seem to care about that at all. Instead, he seems to fall head over heels for Katherine... Erm, Kitty for short... Pryde. Its interesting to see how Claremont managed to have this character fall for a woman with the same name as 'our' prince William would eventually end up with.

But before 'Billy the Kid' can proceed to make more googly eyes as Shadowcat, the train is attacked... 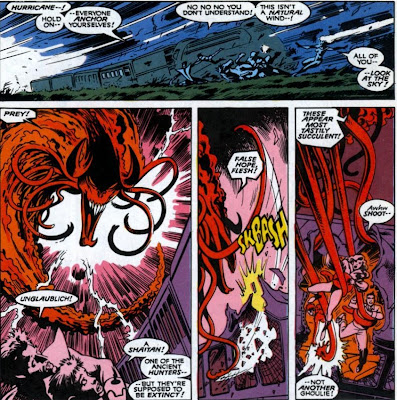 The Shaitan kidnaps Shadowcat, forcing her teammates to follow as best they can. But why would an ancient demon have any interest in a girl from an alternate dimension who had only just arrived here? The answer is, as always, shocking... 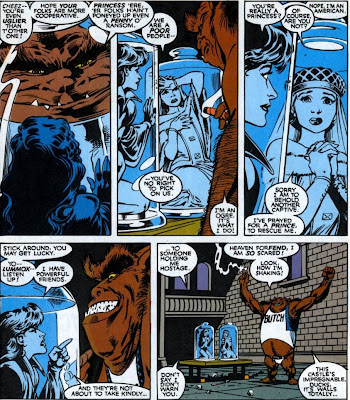 A good decade and a half before the first Shrek movie, Chris Claremont takes advantage of the bad reputation ogres have by revealing this particular butch character as the master of the shaitan who kidnapped Kitty Pryde.

The ogre is a little strapped for cash so he kidnapped princess Kate in hopes of fetching a handsome ransom fee... When that didn't happen, allegedly because Kate's kingdom is equally poor, the ogre sent out the shaitan once again and it returned with Shadowcat.

Just how someone whose natural state is being intangible gets abducted against her will is beyond me... but hey. It turns out princess Kate is actually that reality's Kitty Pryde without mutant powers so it makes a decent amount of sense the shaitan zoomed in on Shadowcat. Needless to say, Excalibur and prince William soon traced shaitan to the ogre's base and defeated both of them. Then, William dropped a bit of a bombshell... 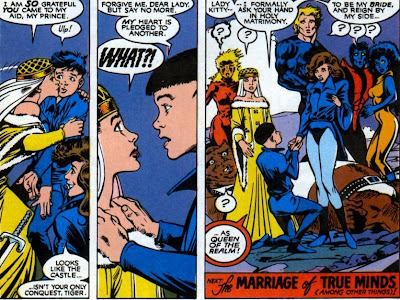 For more on that, check back for part II of Abdicating All Control Of Your Mind: "Heavy Is The Mind Controlled Head That Wears The Crown...

Oh, and for those of you waiting and wondering what's keeping the whole mind control motif... Check out these scenes taken from Excalibur's daring rescue... During the raid, Rachel 'Baby Phoenix' Grey touches the waters in the castle mote and hilarity ensues... 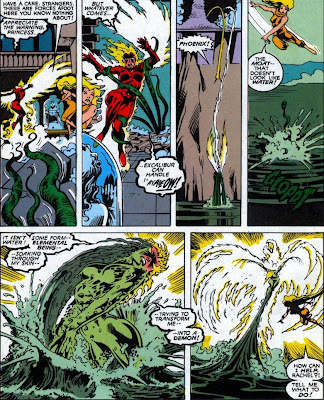 Posted by Clarmindcontrol at 11:59 PM