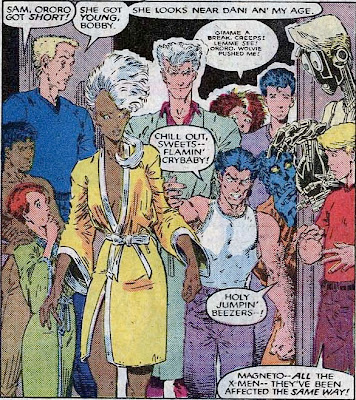 Chris Claremont must have written Uncanny X-men Annual # 10 with tongue firmly in cheek. It almost reads as a pastiche to those movies where teens and adults switch bodies like Tom Hanks in Big, Lindsay Lohan in Freaky Friday and most recently Zac Effron in 17 Again. But of course, this annual has that typical Claremontian twist so there's plenty of mind control. 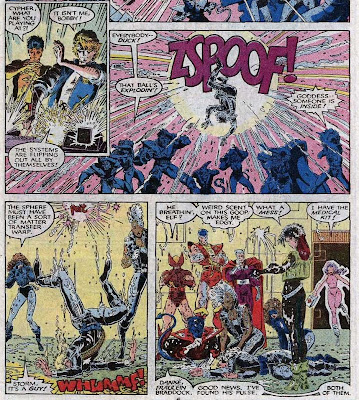 How did the X-men get turned into younger versions of themselves, you wonder? Well, during an otherwise uneventful training session in the Danger Room, the X-men and Magneto got covered in some weird form of ectoplasm when someone just teleported in, along with all that goo.

The mysterious stranger would turn out to be Longshot. But he doesn't really play any part in this story, spending most of it in a coma in the X-men's med-bay. And its not like the X-men or New Mutants have any time to focus on him... the X-men appear to be deaging at an alarming rate. 14 year old Kitty Pryde is turned into a young girl overnight. This prompts Warlock and Cypher to research this change. Of course by merging together... mind control by any other name... 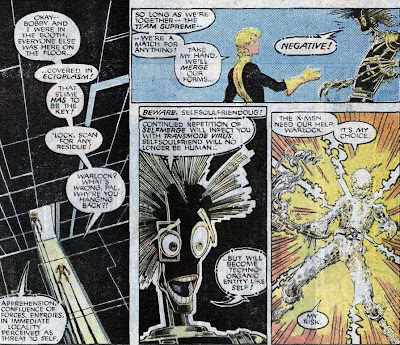 The 'team surpreme' is able to deduce what's causing the X-men's problems but alas... the young X-men appear to be under someone's influence because they act rather irrational. 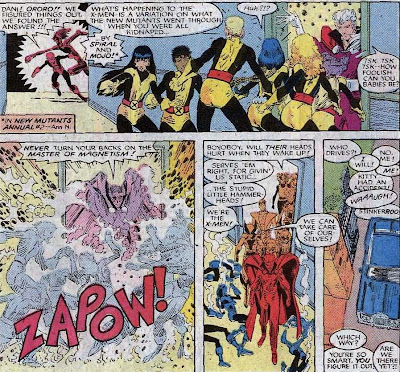 Nice to see forced infantility hasn't dulled Magneto's mean streak. The soon to be X-toddlers commandeer professor Xavier's limousine as they seek out Mojo and Spiral. Note the dialogue in the last panel. Apparently Kitty's reverted to a pre-potty trained state. Charming. Still, diaper changes or not, the team soon locates Mojo at an old theatre downtown. And he's more than happy to see them. 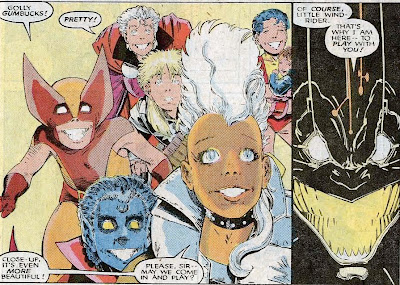 "Of course, little wind-rider... That's why I am here... to play with you!"
Mojo luring in a bunch of innocent, googly eyed children with a sadistic smile and the promise he wants to 'play' with them just seems... wrong. Lets just agree any sexual undertones are completely unintended and move on.

Meanwhile back at Xavier's, the New Mutants had recovered from Magneto's whammy and figured it was up to them to save the X-men from whatever evil scheme Mojo was up to. This prompted the X-babies to consider themselves replacement X-men. Figuring they had to take up the mantle, the teen team decided to dress for the part and donned their graduation uniforms for the rescue mission. 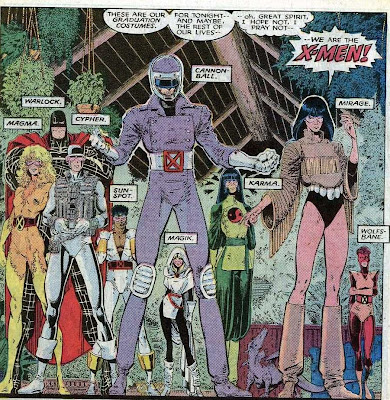 Just look at those Art Adams designed costumes. Fair's fair, Cypher's costume makes him look like an off colour Cyclops, Warlock basically mimicks Superman and Mirage's impossibly tall legs in that outfit make her look like a cross between a stripper and an extra from a Cher video.

But the designs for Magma, Karma and Wolfsbane are actually pretty decent. Adams really went to bat designing these, as it turns out, one off costumes. And yet, the design for Cannonball proved to be inspirational to, of all people, Rob Liefeld, when he designed Sam's first X-Force garb. 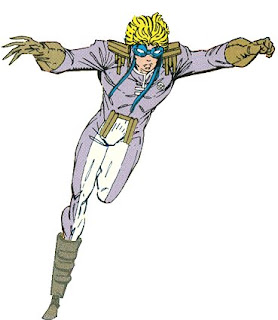 Anyhoo, Magik uses her, well, magic to locate Mojo and her teleportation powers allow the new X-men to pop right into the theatre Mojo is using as a hideout. As it turns out, the place isn't as deserted as they had expected. In fact, there's a huge crowd waiting for some action... And action is what everyone is about to get when the all new X-men meet their all screwy predecessors... 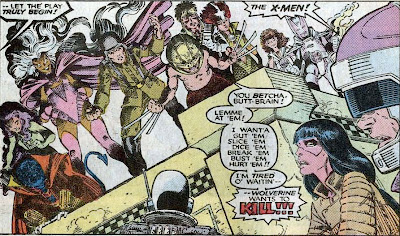 Ahhh, yeah... Part of Mojo's de-aging whammy was a mind control spell that bound the X-men to him as they regained their lost years. Of course, that meant they were dressed as twisted versions of themselves. Just look at Magneto, a former victim of the third reich, wearing the uniform of a Nazi soldier. Rather jarring.  But as set ups to exciting fight scenes go, this one's a doozy... 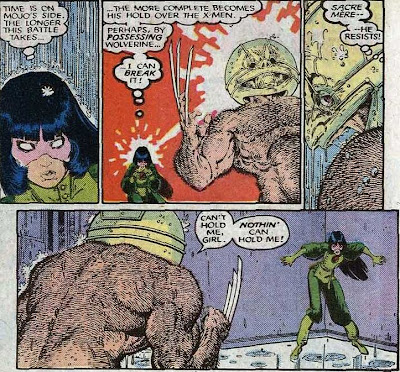 In an interesting twist, Karma actually realises she has the power to possess people. So she should be able to take over the Mojo controlled X-men, right? She first tries that trick on Wolverine, who doesn't seem too fazed at first, even uttering the ironic "Nothin' can hold me!" as he's still under Mojo's influence.

Meanwhile Mirage and Sunspot are having similar problems with Rogue... 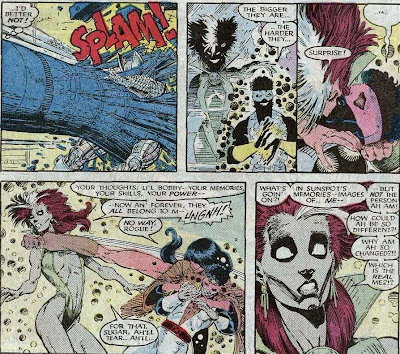 You might wonder why the audience hasn't fled during this obvious fight to the death. Well, that's because there's mind control involved there as well... 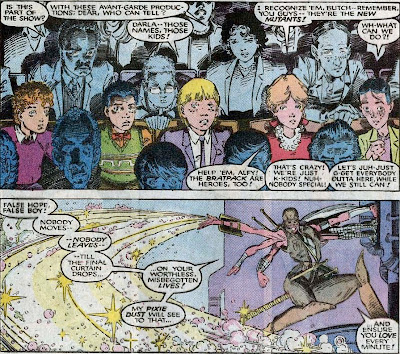 Spiral mind controls the crowd to stay put... After all, what's a resounding victory really worth without a captive audience to witness your triumph? Unfortunately, the battle goes poorly and the crowd gets restless which forces Mojo to act. 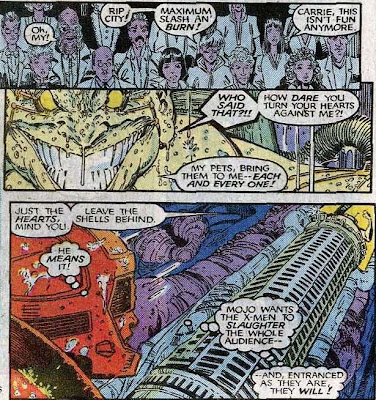 In the end, the former New Mutants are able to reign in the X-men and together they manage to turn the tables against Mojo and force him to retreat to the Mojoverse. The semblance of order restored, Mojo is allowed to close out the story in style...

Posted by Clarmindcontrol at 2:14 AM

I have a suggestion - why not have a few posts about the highlights of Claremont's X-Men work? The good side of his work, that didn't involve mind control. Seeing the endless amount of mindcontrol is fun - but seeing nothing but it, you can sometimes forget the awesome stuff Claremont introduce to us inbetween.

Thanks for your suggestion, but the title of the blog *is* mindcontrol central after all. I try to deal with different aspects of Claremont's work from time to time in the entries, including some praise even... And more importantly: if I wasn't entertained, intrigued or at the very least amused by his writings, I wouldn't even be writing these. The blog isn't meant to slag or offend Chris Claremont needlessly, sorry if it comes across as such.

Oh, I know that. I guess its just seeing to all at once, it can be easy to forget the great stuff Claremont gave us, besides the mind control.

These are just about my favourite comics ever. I started reading xmen around this time and loved the introduction to Psylocke being kidnapped from the ski lodge, the xmen meeting Mojo, the brat pack, which included what I think was an introduction to an early version of Jubilee but a Caucasian girl. Anyway I'm loving this blog. Have you done the Shias empire story yet with Jim Lee all over it?

Great to hear you're enjoying the blog, the Shi'ar storyline was covered back in 2008:
http://clarmindcontrol.blogspot.nl/2008/12/shadowy-charley-mindcontrol-xavier.html

Uncanny X-Men is the best book ever. In a thousand years the only books people remember is the Bible and the Uncanny X-Men. Praise Xavier!