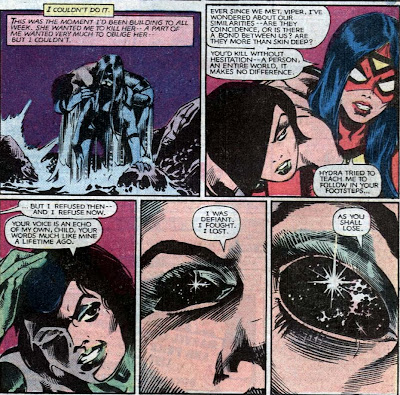 Oy, how did we get into this one?

Back in Spider-Woman # 44, Chris Claremont brought the grudge match between Spider-Woman and  Hydra to a head... but this single issue has one of the most surprising shifts in tone and subject matter that surprisingly manage to gel together and still feel natural, logical even. Not to mention all those startling revelations at the end!

So, how did we get to Spider-Woman dragging the supervillain Viper out of the drink? Long story involving Hydra, the Yakuza, Viper almost killing Spi's best friend Lindsay, a forgettable character called the Judas Man and more.

Lets just say Viper and her terrorist group Hydra had been after Spider-Woman for quite a while. She felt a seemingly inexplicable hatred towards Spi, which at times almost bordered on love. But when Viper fatally wounded Lindsay, Spider-Woman swore to kill her. Obviously that didn't really work out.

Well, not really, Jessica... Actually, in a surprise twist that turned the story from gritty film noir revenge plot into an unexpected tale of horror, Viper reveals her left eye is made of more than just scar tissue. She casts Spider-Woman into a subdimension where she comes face to face with... 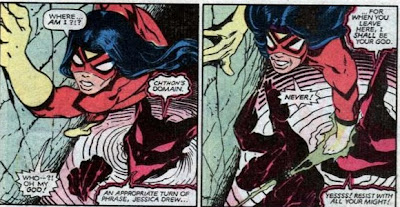 Viper had actually sent Spider-Woman to the dimension of Ch'ton, one of the first Elder Gods to walk the Earth and the creator of the Darkhold, a legendary magic tome that contains all of his dark arcane knowledge.
- warning: excessive continuity heavy rant ahead-

Claremont really tapped a rich vein with this tale that has interlocking parts as it grows. Ch'ton had fled the earthly plane millennia ago to avoid destruction by the hands of the god slaying monster Demiurge. Foreseeing that creature's demise, Ch'ton had planned a way back: through a spell in his Darkhold, which had become popular enough to spawn a cult: the Darkholders.

In the 13th century, a group of Darkholders led by Morgana Le Fay attempted to summon Ch'ton back to Earth to use him as their servant. Of course, the Elder God proved much too powerful to control so Morgana locked his essence into a single location: Wundagore mountain in the Balkan nation of Transia... The exact location where Jonathan and Meriem Drew would bring their little daughter Jessica centuries later...

- Here endeth the rant, back to the demonic possession in progress - 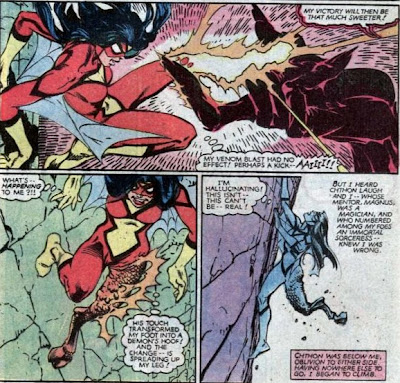 As far as mind control goes, this is a pretty graphic and effective way of showing how Ch'ton is corrupting Jessica. By seeing her slowy become more and more demonic, until she mirrors him. 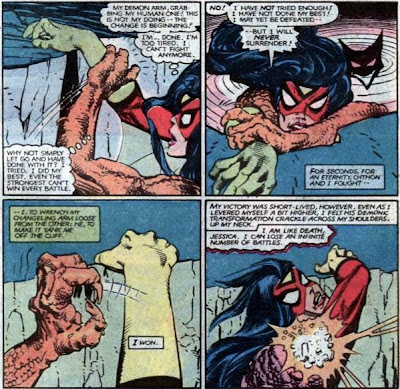 All kidding aside, this is powerful stuff. Heavy on symbolism and perhaps a tad campy, but the message about struggling against one's inner demons is quite eleganty portrayed here. Still, this is a comic book, not a therapy session... So, here comes another obstacle for the dark angel to overcome...

A good question, though it'd hardly be the first to come to my mind if I was dangling off a cliff in an elder god's subdimensional playground while being turned into a demon from the pit you're about to fall into.

Still, it proved the right question, because it made Viper think... and act. 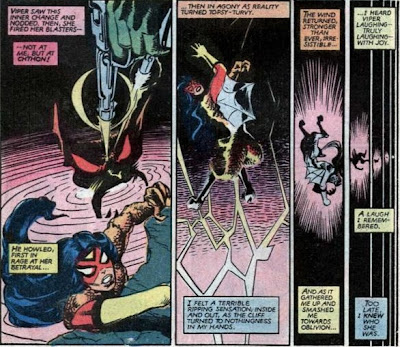 Getting back to Earth, Claremont has Jessica make it a point to immediately strip and dive naked into the chilly ocean to... refresh herself. So, yeah, she really is butt naked when Viper teleports in for the denouement. 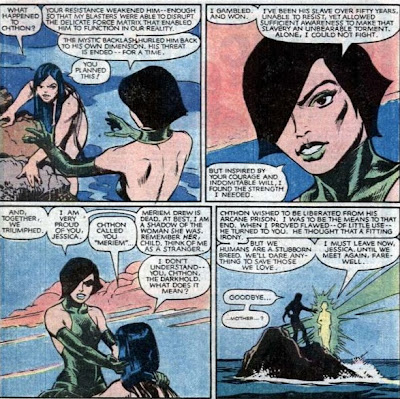 "I've been his slave over fifty years. Unable to resist, yet allowed sufficient awareness to make that slavery an unbearable torment."


Having Viper turn out to be Spider-Woman's mother Meriem was an exciting and clever idea on Claremont's part. Unfortunately, J.M. DeMatteis soon debunked the entire story in Captain America, writing it off as one of Viper's delusions... She is quite insane, after all.

A pity, considering it felt like such a natural fit and would also have tied up yet another nagging, loose end in Spider-Woman's already convoluted origin story. After all, we never did learn what really happened to Jessica's mother when she left her husband and daughter in the late 1930s...

In conclusion: Despite the fact it features an almost criminal amount of mind control and soul claiming, Spider-Woman # 44 can be considered a textbook example of how to tell an engaging story that builds on past events, instead of being bogged down by them. Claremont cleverly uses established continuity to expand and enhance his characters. Not to mention that all these events take place in one issue, without ever feeling forced or even slightly rushed.

Quite a feat indeed.
Posted by Clarmindcontrol at 4:52 PM

Were you upset with J.M DeMatteis or Jim Shooter for removing such intriguing character development on Spider-Woman and Madame Viper? Because let me say, this good story telling.