Lets start off with a positive comment regarding Claremont's writing: he never considers himself too good to use characters or plots he didn't create himself.

Case in point: Fantastic Four # 20, which features the FF's triumphant return to the 616, after being stranded in the Negative Zone for weeks. The team reappears in Paris and its a good thing they showed when they did because the capital of France is suffering from major mystical problems... All because of The Ruined, a band of interdimensional beings Scott Lobdell introduced back in Fantastic Four vol. 3 # 1. Back then, the team was just in time to stop the Ruined from changing our dimension into theirs, converting people and matter alike. Mindcontrol on a universal level, a first! 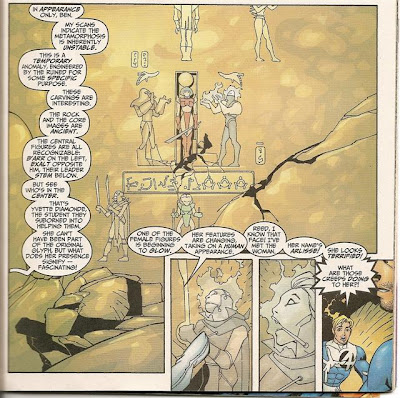 But now, the team is a little too late. The transformation's already begun. What to do? Well... turns out there's still a whole lot left to do. The FF manage to reverse the dimensional shift... no harm done. But their presence in Paris leads to the meeting with Margali Szardos (whee-hay! Another character from the X-men mythos... Who's keeping count, anyways?)

The FF get detained in Paris, so lets skip ahead to issue # 21, which features a mind control centered appearance by everyone's favourite Norse Goddess of Death, the ever divalicious Hela! 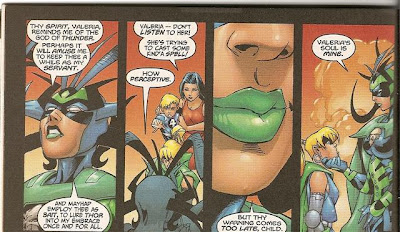 Read the panel? So, who is Valeria, you ask? Well, she appeared to be the extradimensional second child of Reed and Sue, the daughter they thought they'd lost back in 1984 after a very sad and unfortunate miscarriage. This Valeria all of a sudden 'time-danced' into Pier Four, the FF's base of operations, while the team was still presumed lost in the Negative Zone. Valeria's older (but because she time-shifted also still younger) brother Franklin and his nannies were dumbstruck by her appearance, but Valeria proved her worth soon enough. 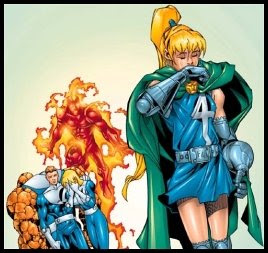 Before they had a proper chance to say hello, FF Headquarters was invaded by the Bacchae, a group of old enemies looking for revenge. Valeria got Franklin's Inhuman puppy to teleport them all to safety, but 'safety' apparently included the domain of Hela... The Goddess of death took a keen interest in Valeria and proceeded in an attempt to mindcontrol her... Before she succeeded, Puppy 'ported the group away again, in their quest to locate the Fantastic Four... Of course, before issue's end they all got reunited again. Talk about a happy ending.. That is, until the next issue featuring earth's mightiest mind control!

By the way, on a completely unrelated sidenote: when he took over FF, Claremont had planned to introduce none other than Kitty Pryde to the team. This of course, would have made using other X-men characters more than extremely easy. Kitty was supposed to serve as a big sister to Franklin and her natural genius would make her click with Reed. Even Sue would be hard pressed to not regard her as part of the family. Marvel Editiorial decided against that, judging Kitty's place was with the X-men. Sooo... We got Valeria. In all fairness, not the worst character in the world, still her timetravel/teleporting shenanigans do resemble the early Rachel Grey and teenage Illyana Rasputin arcs.
Posted by Clarmindcontrol at 9:00 PM